WHEELCHAIR BODYBUILDING: HOW IT ALL BEGAN

Since its creation in 1993, the Wheelchair Bodybuilding Federation has done nothing but expand and grow.

Find out how it all started, from Frank Dalto himself, and how a request from his nephew Christopher D’Amato, followed by Jim Manion’s blessing, was the beginning of a true bodybuilding revolution.

One of the thing that you quickly realize about Frank Dalto, is how passionate he is about the Wheelchair Bodybuilding Federation and its athletes. Thru the years, this promoter has seen closely the struggles of the athletes, and he speaks about them with respect, admiration and love. He has become best friend with some, and friend to most. He has lost some thru the years, due to accidents or sickness, and yet when he speaks of them and their accomplishments on stage, he brings them back to life.   Thanks to a phone interview with Frank,  find out about the beginning of a very respected federation that keeps growing. Here is what Frank kindly told us.

” We started in 1993, and there are now over 20 pro Wheelchair Bodybuilding athletes. The IFBB is the pro part,  I work with the NPC. Jim Manion started the NPC . The only reason that we have wheelchair bodybuilding in NPC and IFBB is thanks to Jim Manion, he is the one I called up,  and I said: “”Mister Manion, my nephew is in a wheelchair and he is wondering if we could ever have an NPC  wheelchair bodybuilding division.” “And I didn’t know what he was going to say,  I asked,  and he said: “Frank, let me think about that, ill get back to you.” And he got back in less than 5 minutes and his famous words to me were: “Get it rolling!”.  And we decided to judge them on the body parts they can develop. If they can’t develop a certain part of their body, we won’t hold it against them. We only judge them at what they can develop, that is the fairest way to do it.”

“I am a promoter, I have been doing it since 1980, we did 3 shows a year, and one of the shows, one of the best ones to see is the NPC wheelchair nationals, as well as the Sunshine classic. That show was march 11th  this year. It is in a beautiful area, in Palm Beach. That is a show to go to. ”

His friendship with Jack McCann

Jack has been at every show but one before he turned pro,  and he was a powerlifter, and I got his number from  a guy who was training powerlifters and he gave me Jack’s number, and Jack was so excited and I called him up and he called back saying: “This is Jack McCann from Canada, and I want to be in your show.” And I said: “Jack we would love to have you come in.” The rest is history, and Jack McCann is amazing. Jack became one of my best friends for life. ( Editor’s note: Jack -went on to turn pro, and continues to be an competitive athlete and promoter of the sport with lots of passion)

“There was nothing in the begininng, so the first year, we did it just for Florida, and I think we had called the veterans organisations and we called a lot of gyms to let them know if they had wheelchair members, who would like for them to be in wheelchair shows, we would love to have them, and 5 came in at the first show.” 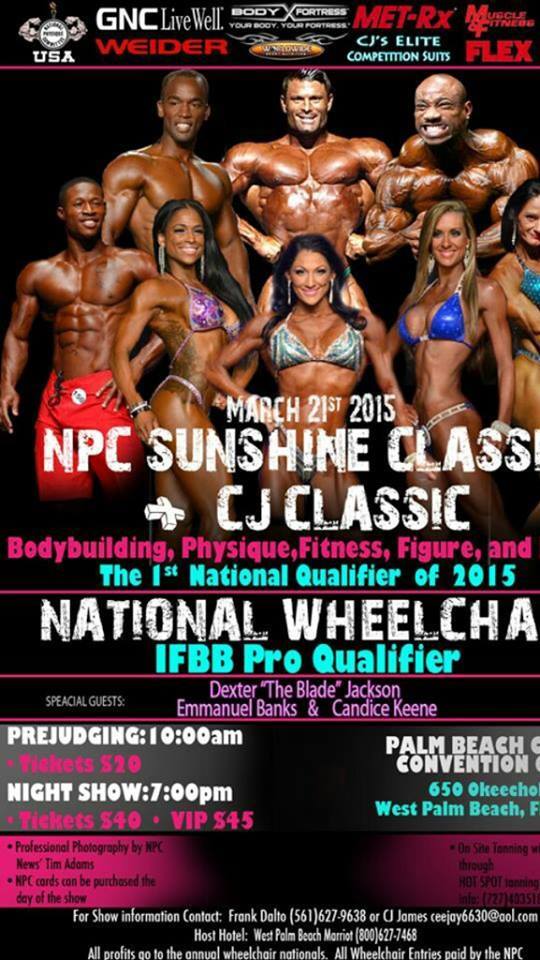 What Wheelchair bodybuilding means to him

“The amazing thing is most of the other sports for wheelchair athletes, they lift weights so they can perform better, so a lot of them have been lifting weights anyways, for years, just to improve their performance in the sport they chose, and a lot of them work hard,  for example during marathons, they power their wheelchair with their arms. They have good strong arms, and they play basketball, volleyball and so many sports. Weights training lets them perform better along with their everyday life. Just something as basic as getting in and out of the shower. So if they have more strength they will function better. ‘’

There is no doubt that Frank Dalto and his team one and only priority is to give the athletes the best  events possible and let them shine. So if you are considering competing, and were told it wasn’t possible, think again.  Women  have also been part of the competitions, and are always welcome to compete. Next year the NPC Wheelchair Nationals will celebrate their 25th anniversary, and we can all expect a huge event!

Feel free to share infos about the Wheelchair Bodybuilding with everybody, and let’s support these amazing, driven athletes.

To find out more about the nationals: Frank Dalto
Check out all about Jack McCann in our article!