AROUND THE WORLD THROUGH FOUR ARTISTS 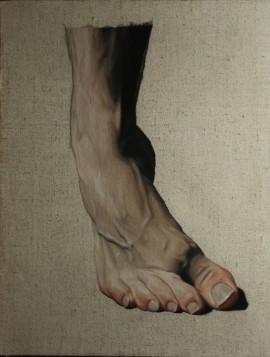 Le Festival des arts du Village presents each year a whole series of extraordinary artists from Europe, the Americas and Africa. Here are a few painters who will be at the event this year and who are very anxious to be discovered. 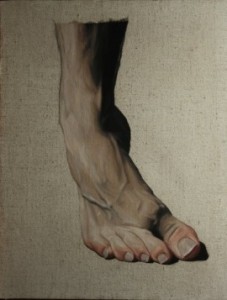 The canvases are alive
Realism is an art movement that has existed for several centuries. This technique aims to create paintings whose subjects looks like as reality as much as possible. At the Festival, you will be able to meet a painter who uses this technique with interesting results.

Martin Douvil is only 25 years old and painting is a real passion for him. More than that,  his reason to live: “It is a discipline that takes time and requires a lot of sacrifices, but I do not want to stop my passion”. His paintings do not leave the viewers indifferent. Its main subject is the human body, and this self-taught painter makes his creations very much alive thanks to the realism of his strokes and color sets. He creates moods and knows how to make feelings such as rage, appeasement and melancholy take life in his characters.

“I have been seriously devoted to my passion for five years already and i never stay longer than three weeks without painting”. Since one painting can sometimes take up to 30 hours to create, emerging artists often find themselves in a difficult financial situation. In order to make ends meet and to be able to paint without too many constraints, Martin gives courses to groups and individuals. In his at home workshops, surrounded by his work, he helps adults of beginner and intermediate level with advice on realism. He also teaches the basics of figurative painting. He would like in the near future to be able to rent a place that would be used only for his courses. His dream is to open a gallery.

The Festival is for him a good way to make himself known: “This will enable me to have visibility and I hope also to sell some of my work. ”  He will have the opportunity to see what his fellow painters do and he can also share his emotions with other realism painters, because he sometimes feels alone. Realism is a current that has little place in Quebec compared to more modern techniques: “I hope that an event such as this will allow realism to take up more space.”

For his first festival, he is going to unveil his latest creations and some reproductions.
Www.mdouvil.com

A world in technicolor

Quebec surely doesn’t lack talented artists, and Benito is a beautiful example. This handsome man with sparkly eyes loves to create and, although painting is his real passion, he also experiences with body painting as well as three dimensional creations made of recycled materials. In his abstract work, colors will attract your attention above all, sparkly tones will make you smile instantly.

Don’t try to remove painting from him: “This universe is necessary to me, to express what is in me, it’s meditative “.
This trained graphic designer started painting in the 80s. He then experienced with  three dimensional art: “This type of art takes up lots of actual space, but it’s so liberating,” he explains. He then created workshops toward the beginning of the 90s, because he works better with a team of people, with exchanges with other painters. In order to be able to work while keeping time for painting, he is currently in a  period of small sized creations. “This is a good compromise between making art and making money! “, He said.

He also creates backgrounds for movies and for bars. The important thing for Benito is to remain creative and to experiment. He will intorduce  this year at the Festival  portraits, especially of children. “People are very busy and their priorities are often elsewhere. It is up to the artists to go to the public; he can’t wait to be discovered. The Festival is a good way to make yourself known. “

Benito is participating for the second time, he loves the feeling of belonging to a community, as well as trading with other artists. “I love to discover other techniques and the vibe of the event! “He would like one day to work on large posters. It treasures in the meantime a curiosity towards his surroundings, and a boundless energy.
Www.ibenito.com

She fell in it as a kid

Not in the magic potion, but into art! France Elliott is an abstract painter  of Montreal. From a family of 14 children, as a child she already loved to draw. Her work is very spontaneous and evolves with her. The result is colorful and intense. What inspires her are the colors: “Colors speak to me, the shades of stained glass windows, the deepest blues … ” She uses a mix of techniques, acrylic, collage and sanded textures. She works in solid or with incisions and even embosses.  Her shapes are very curved, which then brought her to learn Syrian and ancient Persia writing: ” I integrated these letters for the beauty of the writing, it is as lace but made of signs”, she says.

The result: colorful canvases, warm and alive, with an ancient flavor, as precious parchments that we would have found in a treasure box from the past. The works of France are appreciated, even in Europe where she exhibited regularly, in France and in Switzerland. “To find  places to expose is a perpetual dilemma. Visual arts are seen as the poor relative of  culture. There is little room, but we must not be discouraged”. In addition to caring for her family and being a very productive painter, she finds time to give creativity workshops in a primary school. She takes part in the Festival for the second time, for the visibility it provides, since with its thousands of visitors, it can’t be missed. “There are a variety of disciplines, it is very interesting, because there is something for everybody. It’s a multicultural festival, an extraordinary showcase,” she concluded.

Being in wonderland
The Festival has followers everywhere in the world. This year, we will discover the paintings of Jose Parra, an artist from Mexico! His paintings are a mixture of  baroque style and realism, with characters almost cartoonish. The colors are bright, the paintings joyful, dramatic and intense. Jose lives into art since he was very young, because his parents own an art gallery in Guadalajara. Through his art, he wants to carry the viewer elsewhere and introduce him in a process of introspection.

“To be an artist, it’s like being an antenna. Art must be transmitted through the painter, he must just let go and the creative force will do the rest. “He loves painting the human body that he finds absolutely beautiful and the subject of his recent works is the character of Harlequin. According to him, the art has no social responsibilities: “I think that if the viewer is affected by the painting that he admires, if it operates a change of any kind in his life, then  I have done something important. I think that it is like music, it is done for the soul. ” He will take the opportunity to discuss  with other artists present about the exposed art work . “I expect to see art that i have never seen before at the festival and I hope also to see a vast public! “He has promised that he will put only the crème de la crème of his paintings at the Festival.