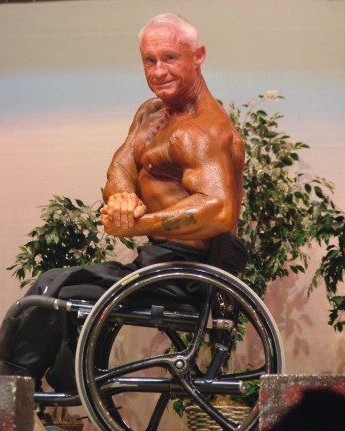 Meet Jack, one of the original wheelchair bodybuilders. His determination, competitive nature and energy paired with an incredibly warm spirit, wit and enthusiasm , have had him on the  wheelchair bodybuilding stages for 23 years and you just cannot get enough of his positive vibe!

This year at the Toronto Pro Supershow I got to see my very first pro wheelchair bodybuilding competition.
There I was, patiently waiting for all the various technical difficulties to no end (most categories just were cursed with all sorts of sound glitches) until finally the 3 pros were able to do their routines. One fo them was Jack McCann.

Among them was Jack, 65 years young, delivering a very smooth and pleasant routine, showcasing various classic poses and muscles groups, all this against competitors half his age. 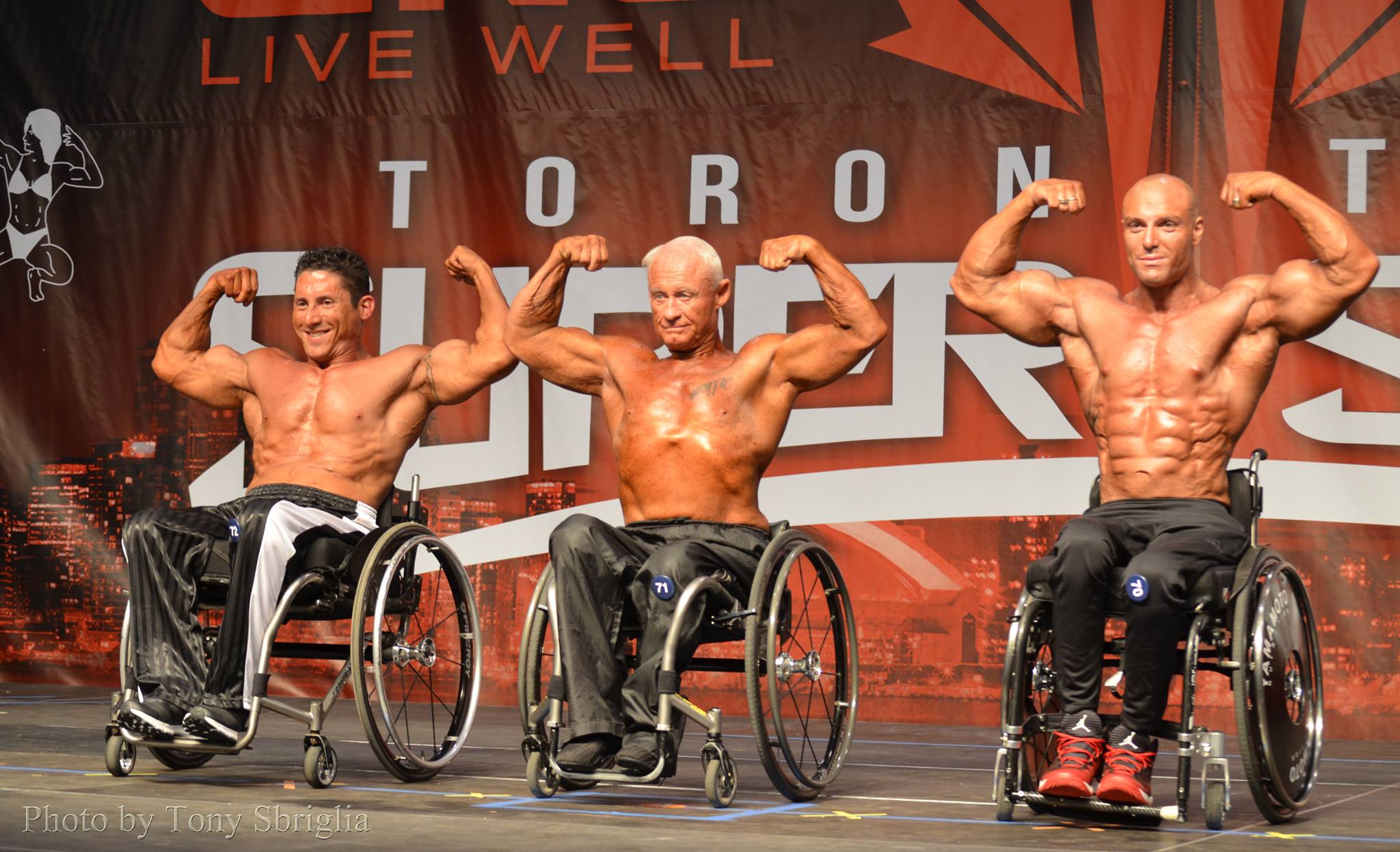 I had to find out who he was and share his story, and luckily enough Jack agreed to an interview. And I have to tell you, every conversation with him, is quite a ride!

On getting into bodybuilding

“I was powerlifting before, bench pressed and did javelot, but there weren’t many competitions in Canada, and there was this  magazine in the U.S., and I flipped thru the articles and found out that they were going to have their very first national body building champion ship, in 1994, in West Palm Beach Florida. So I contacted the promoter of the show, Frank Dalto, and when I told him that I wanted to compete. But being from Canada, could I compete in this show. Frank contacted directly Jim Manion, and that was it, he told me I was welcome to come down to do the show!”

Since Jack was into javelot and powerlifting, he had to completely transform his body to fit into wheelchair bodybuilding.ʺ I had to change my whole body, define it more, get myself nice and lean, I like it better and the girls like it to!ʺ he says laughing joyfully.

“I got myself a trainer, started dieting and in my first show, I finished third in a class of 17 competitors, and I have been going ever since, I am one of the original ones still competing.” He adds. 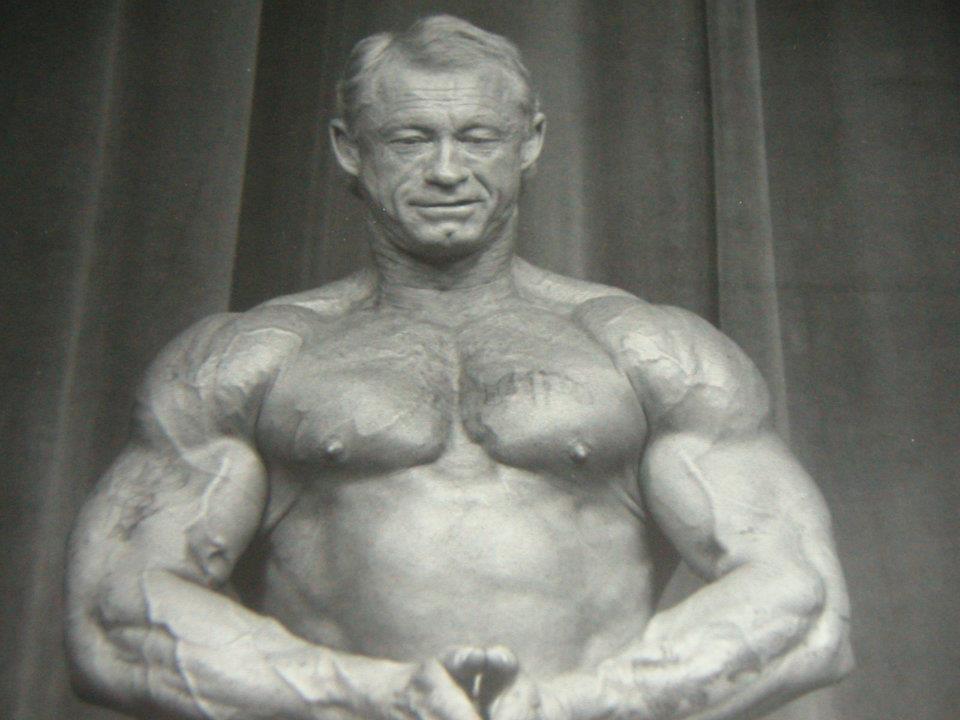 Jack McCann during one of his first competitions

Since then, Jack has been doing an average of 4 shows per years at first, to eventually “slow down” to 2 a year, and he just loves competing.   ʺI just love it, it’s my age, and I keep going against young guys, I love it.ʺ Jack has now been on the pro circuit since 2015. 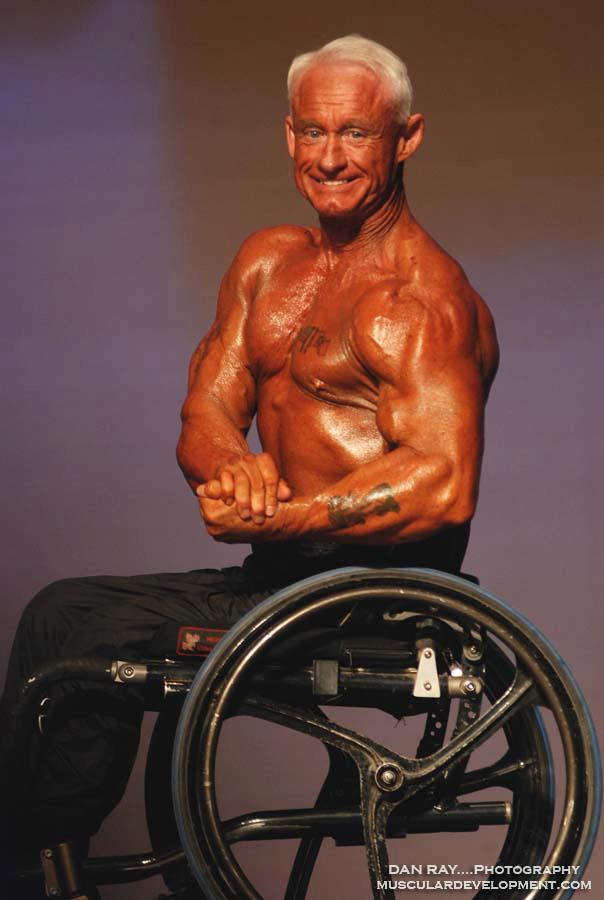 Road to the Arnold for Jack McCann

It is only recently that the WCBB has been part of the Arnold Classic, and last year Jack couldn’t be stage ready due to a surgery, he is definitely prepping for that stage this time, with his long time trainer and friend, the very successful Laura Binetti.

The Toronto pro show got him lots of attention: ‘lots of people kept coming up to me and saying they couldn’t believe how old I am and they hope to look like me, which is good for me!’
It was also his first Canadian show, before this year there were no pro wheelchair competitions available in Canada. Since 1994 Jack has competed in Australia, Greece and all over the United States. 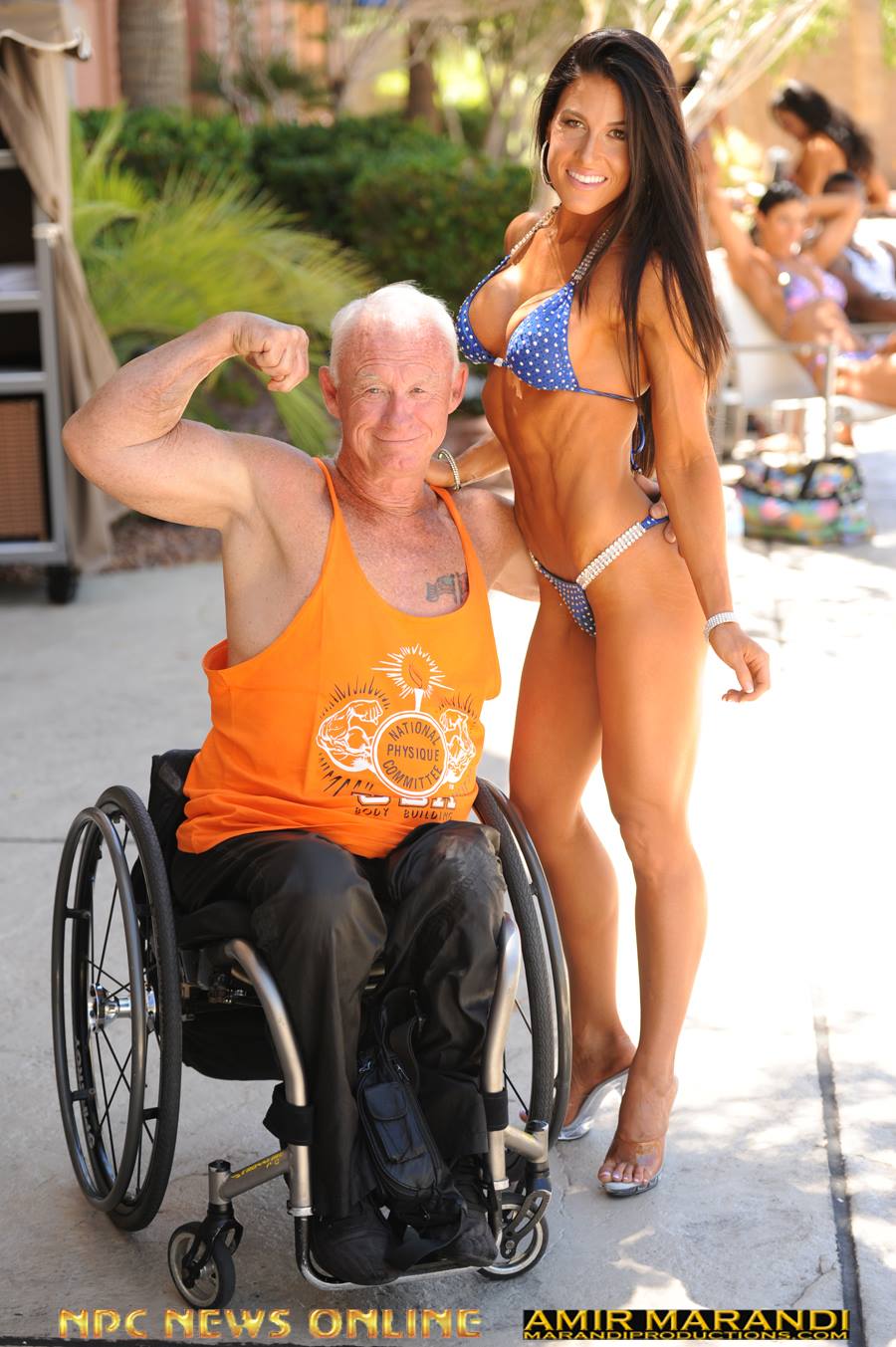 Jack McCann and a bikini competitor

For his Canadian debut, he had picked “Thunder struck” from AC/DC, but he had to show his hard work on a random heavy metal song, due to some confusion, but that did not faze him the least. “I guess the sound guy didn’t take down properly my song number, and instead of 71 I got 74″he explains laughing.
For this comp he was prepared by Tim Gardner, Laura, who has prepped him for most of his show, couldn’t do it this time due to too many ongoing projects that she had at the time.
Jack’s weak spot is his low metabolism, so for contest prep he will start 22 weeks out with dieting and training hard. “I think I have been doing this for so long that the training is just so natural for me, and the dieting you get used to it.”
Each day has its own body part to train, and he will workout 7 days a week during prep, 3 of which will be only cardio, 30-40 min of indoor tracks on his wheelchair.
For the Arnold, this kid goal will be to bring more size in his back. “What happened is that I dieted so hard that I lost my size. I was ripped but I lost my size.” he explains.

Training when on a wheelchair can be challenging at times, since most gyms are not set up for anybody not abled.  “Depending on what gym I am going to, I will check out the equipment and work out how to adapt to it.”

Jack is very serious about his health: “I get my blood checked every three months, to be sure all my levels are good, and the doctor always goes to me: if you don’t hear from me, we are good! To me it doesn’t matter where I place when I compete, I enjoy it, I always have, I have a good time! If I improved from my previous competition that is good, if not it doesn’t matter, I know I will get compliments form my peers,  a lot of the abled body athletes and fitness girls, Mindy O’Brian gave me quiet the compliment, because my music went all wacko and she said I handled that so good.”

Jack McCann is involved in bodybuilding outside of competitions too: “I work a lot of the shows, I just got back from working a Chicago national show, I work security, help with the documents for the athletes, the next show I will be working is in Las Vegas, and I will work the Olympia in September.”

“Get a trainer, and the main thing is that dieting is really the killer training is easy for me, a lot of people can’t adjust to the diet, it is mentally tough, I know guys who will crave a week out form the show and blow their whole diet.  If you don’t place well at a competition, don’t worry about, go talk to the judges to get a bit of insight, just don’t worry about it, come back and improve, but don’t get down on yourself.”

For those who are not abled with their legs, Jack also has some more advice:
“You have to try to keep away from the alcohol and the drugs right off the bat, come to a weight room! You might not like it, but it will keep you healthy and you can just do it for fun, or you can go to the wheelchair basketball etc.”

Jack has a nice dream he would like to see happen:  the Olympia stage:
“I saw a guy and he was 70 years old, so man, I got to go for another 5 years or so! So to get on the Olympia stage would be great! If it doesn’t well, I am trying everything in the world, I am one of the original wheelchair bodybuilders and I am having fun, and meeting people from all over the world. From Poland, Sweden, Finland, and I just have a great time.”

When you speak with Jack, or you are lucky enough to call him your friend, one thing will hit you hard: This is a heck of an athlete with a true passion for the game.  You will discuss training techniques and tips, competitors and placings, and crack a few jokes.

His determination, camaraderie and strength, even on a bad day, will have him always looking ahead with ambition, and he will inspire you to get as excited about life as he is, no matter in what category life has placed you. This is truly the mindset of a champion, so go ahead and talk to him if you see him at an event, you won’t regret it.

To find out more about Jack’s contest prep with Laura Binetti: laura-binetti-on-prepping-jack-mccann