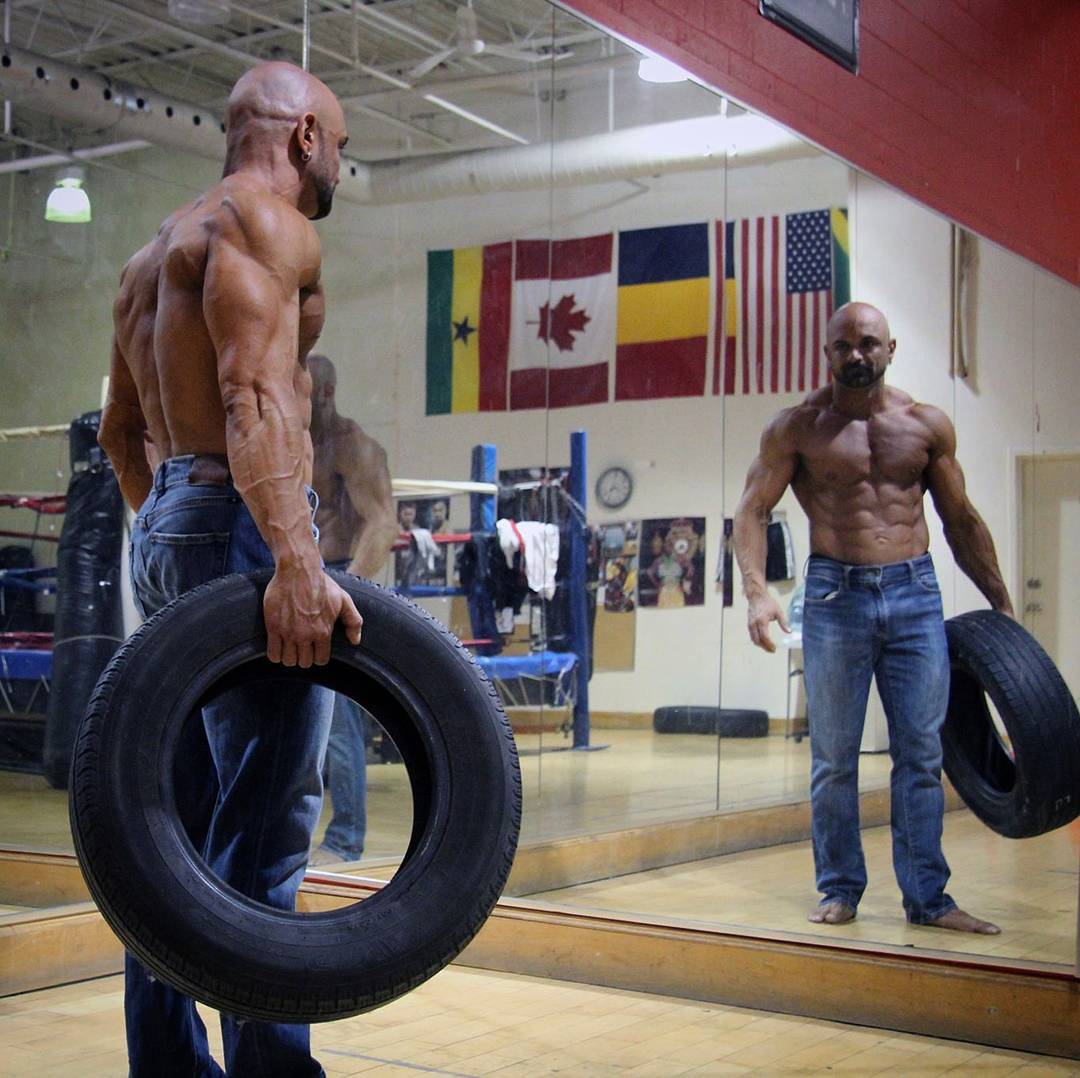 At this year’s Ben Weider’s Legacy cup in Toronto, I met with John Vella.

Our paths had crossed after the Toronto Pro Supershow this summer, and we stayed in touch. Being the friendly guy that he is, John Vella saw me on the subway wearing my Proshow media pass and assumed I was a competitor ( flattery won’t kill me). After a quick exchange, I discovered that he was the one actually competing, and we stayed in touch, with the promise that I would keep an eye on his competition’s path.   Sure enough I got to see him on stage a few months later, and it was an athlete with a very interesting package that competed against some tough competition, but even against the heavy weights, John Vella had presence, mass, symmetry, and deserved his spot. The potential of a pro in the making is all there. 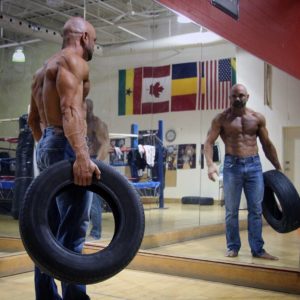 John has discovered competitive bodybuilding only recently, and it has been a constant improvement from one competition to the next… The ambitious competitive streak runs deep in him, and yet he remains approachable and willing to learn. I had the pleasure to discover what motivates him, and how he handles his health challenges. Find out about an athlete that is only getting started, his story, in his own words.

John Vella is a 42 years young athlete living in Southern Ontario.  At 14, he started being sick with Crohn’s disease, but only got properly diagnosed years later, in ’92. “I wanted to be stronger as well so I think that’s what got me into bodybuilding.

I was 18 when I started playing around with weights. Around that time I also started taekwondo. My training program for bodybuilding was pretty basic.’’ He explains.

“As a kid I used to watch He-Man, and also in a lot of shows back then, the guys were very muscular. Conan the Barbarian for example.  In Greek mythology too, so I think I thought it was so cool, it helped me feel better and it reminded me of those surreal characters of fantasy movies.

My brother-in-law is the first person that told me about bodybuilding, he would show me the magazines and I realized right away that I loved this sport!

I am a huge fan of Dorian Yates and in 2005 I was in Birmingham and he was giving one on one training sessions at Temple and I did one!  It was surreal! I couldn’t believe it was happening. I remember we did back and triceps.  He has the best back so I had to. Back is one of the parts that I’m known for now, so I got it from one of the best I guess.”

‘’Learning about bodybuilding I had to learn nutrition too, since  that’s a huge part of it , so I noticed when I got more clean food, my symptoms were decreasing, weight training also increased my appetite, and it helped a lot with the symptoms.

By the time I decided to compete the symptoms were minimized, I’m still learning and dealing with surgeries, since I was in and out to the hospital often.” 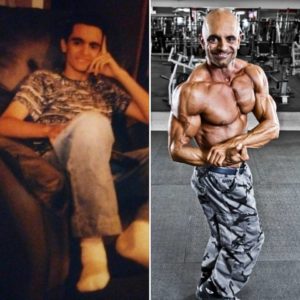 A very self-explanatory picture of John Vella from his toughest times dealing with Crohn’s to today’s healthier life.

John Vella was practicing many sports, ” I was training Brazilian jiu-jitsu, a bit of powerlifting, as well as bodybuilding, and I reached a point where I was like:  I want to see what happens if I focus on one discipline instead of being spread out.  So I concentrated just on bodybuilding. I wanted to get shredded and see what it is like to get shredded.  As I started getting leaner everybody around me was asking if I was competing. But I wasn’t sure yet.

So I finally decided to do the Fouad Abiad (in May 2016). I remember that I was very shredded by New Year’s 2016 so by February I was finally convinced to do my first competition.”

At the local gym where Johnny Vella trains, a lot of high caliber athletes and trainers are regulars, ‘’I said the next person that walks thru the gym door, I’m going to pick them as a trainer.  IFBB Pro Stéphane  Caron was up for the task.  He said; okay let’s see what you have, and he was impressed that I did all this by himself. So it was 9 weeks from that point may 14th 2016 so I had nine weeks and I was pretty much ready, I learned a lot from him. ” 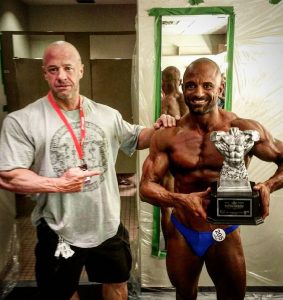 With Stéphane Caron by his side since day one, Johnny Vella plans to continue improve on his conditioning and to do Nationals in October 2018 in Toronto.

‘’I am hooked on competing now, I had no intention of competing ever, honest-to-god, it happened when I won that first show.

When I was at Nationals I knew that I had to improve my hamstrings and glutes and I actually did.

I want the same thing I brought at the Weider’s,  with more mass,  so I try to keep adding mass without losing any of the detailing  and  keeping the aesthetic. ” 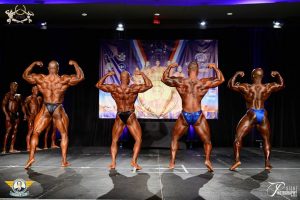 A day in the life

John Vella is a freelance sound engineer at TSN and works different shifts.  “As a freelancer there are some busier periods where I work more than 5 days a week, other times much less, so I just take whatever comes. I don’t have a specific schedule, most of them are night shifts. I love the shifts I’m working, I start late in the evening so I usually train around 5 pm  and  when I’m done I just go work,”

Preparation and discipline are the keys to his consistent improvements and success: “Pretty much every day you need to have discipline, my shape is pretty steady even during off-season. I don’t want to blow up too much, so I stay lean all year.  With my disease, if I eat too much it is too hard on my digestion, so it forces me to add steady mass all year round.  A lot of it is preparation and planning, I don’t know anyone successful who doesn’t plan ahead. Especially for the eating.  I train 6 days a week.’
After a quick pause, Johnny adds with a smile in his voice: maybe I push it too much, I don’t know. Stéphane needs to hold me back because he says I’m too intense.  He says I train too hard and I need to dial it back.” 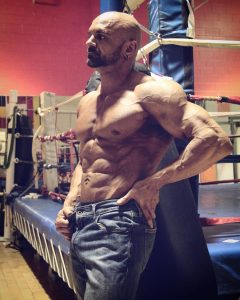 What advice does he have for anybody considering competing?

“If you’re going to compete, you have to put everything else on hold, you cannot do it halfway.  If you want to do it, everything else needs to be on hold or has to be second to this.  I wouldn’t be able to do it otherwise.  You have to make it a priority.” 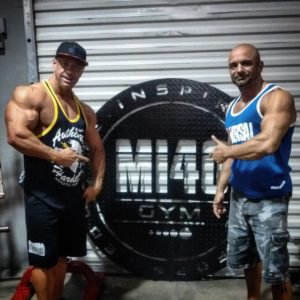 ”One of the biggest parts of bodybuilding is eating and digesting, otherwise you’re not going to go anywhere. With Crohn’s disease it’s a process, it took me a while to get to the point where I am now.’’

“I think it is possible so it is a matter of how stubborn you are,   honestly with the mainstream medical community, with what the doctors had said to me when I was a teenager, they couldn’t be any more discouraging.  Had I listened to them I would not be here doing this.”
“There is different ways to be a bodybuilder. I think I found out how this works for me; it’s like a bandage, it forced me to be better. It is not even an option for me to eat a bunch of garbage as I am going to flare up and get sick.  It forces me to have discipline and to learn about nutrition.  When I was 18 years old I was reading biochemistry lectures from nutritionists.”

Do not give up

“The more people I can reach with this message the better it is.
Don’t quit is my message.   Don’t go into self-pity. I do have empathy for people, but if you quit, if you quit I guarantee you that it is over, you have to be stubborn. 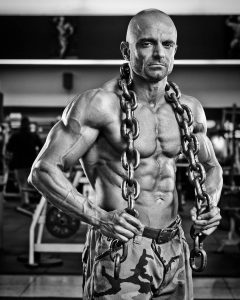 Find out more about John Vella on Instagram right here
And hit him up if you want to sponsor him!